The third annual Peter Stursberg Foreign Correspondents Lecture was one for the books.

Adrienne Arsenault presented the talk to a full house on Nov. 30 at the Canadian War Museum, reflecting on her experiences as a foreign correspondent.

The underlying narrative throughout her lecture was the important role that foreign correspondents – and all journalists – play in the world. Arsenault spoke of the challenges they’ve faced and outlined her ideas for conquering the obstacles. She believes that although technology has been a hindrance, it has also promoted positive change.

Arsenault shared the story of the late Joe Schlesinger, a Canadian foreign correspondent and television journalist. Schlesinger believed that technology, in particular the satellite dish, impeded the freedom of journalists. As soon as the capacity was developed to relay material across the ocean via satellite dishes on location, reporters were told to stick close to the satellite feed points and file more often. They no longer had the freedom to spend days in the field gathering material before submitting their reports. The tightening of the leash infuriated him.

Arsenault reflected on her own frustration and the pressure that she felt to file more quickly and more often. But that was decades ago, and with time has come more change that has given her hope.

“Technology has changed again. Meaning journalism has changed and we’ve changed as consumers. We are once again tasting that off-leash freedom that Joe once thought was gone,” she said. “The capacity of these phones and tiny knapsack-sized transmitters allows us to send stories and go live from pretty much anywhere. There are no stories beyond our physical range anymore. It means that good journalists can make stronger cases for going into dark corners – into places where we are not wanted.”

This technological change, Arsenault said, has made it more important than ever for journalists to share the truth.

“Protester shot, bridge collapsing, airstrike hitting hospital – the actual news is now dispatched through these devices by average citizens who happen to be witnesses. This means we need journalists to verify, decode, expose more than ever,” she said. “Technology just keeps changing us. It always has, but every time it does the journalists have no choice but to work harder as guardians of the truth.”

An obligation to tell the truth

Arsenault has made it her mission to expose the truth. A self-proclaimed fighter, she said it has always been her task to uncover the stories that would otherwise go unheard. She wants us to hear, feel, and smell the good, bad and the ugly.

“Matt Halton and Peter Stursberg… they were the CBC’s first war correspondents. The first broadcasters to make shrinking geography the priority, which remains the goal of every foreign correspondent,” she said. “To let you feel, hear and connect with those places so far away – as if you weren’t just comprehending the facts of explosions – you were smelling those never-to-be forgotten scents of cordite from weapons and iron from blood.”

With the changing of technology and in the face of the “fake news” phenomenon, Arsenault said she worries whether anyone cares what journalists do anymore.

“I believe there are good journalists in every generation who want to fight to get right up close to the truth – and they’ve been finding ways to get to the stories since Peter Stursberg realized in order to get to Europe to cover the war he had to travel on a ship loaded with dynamite,” she said. “Where I worry… is whether anybody cares what we do.”

A solution to this lack of attention, she suggests, is finding ways to punch through the wall of disinterest by utilizing technology in inventive ways, not just fighting it. Arsenault played a video of a teenager who made a post on TikTok, a social media platform popular among the younger generation. The young woman made a short video that started with beauty advice in order to attract the attention of viewers before morphing into a critique of China’s crackdown on Muslims in Xinjiang. At the time of Arsenault’s lecture, the video had gone viral with more than 1.5 million views.

“So, maybe people do care,” Arsenault said. “If we find a way to reach them where they are. Take our journalism to them. Continue to ensure they can see this work when they want, not when news organizations choose to deliver it – and then, if it connects they can magnify it. Circulate it. In ways news organizations cannot.”

... no matter how horrific

Arsenault has travelled to the darkest corners of the world to cover stories near and dear to her heart. Her investigative work on security has allowed her to pursue terror stories across the globe. She’s reported on events such as the Ebola crisis and Zimbabwe election.

“Amazing things happen when you get close,” she said. “The truth shouts at you.”

Many of these moments of truth have been devastating, Arsenault said. One moment in particular took place in Venezuela.

“Nothing clears the vision more than sneaking into a public hospital and seeing patients slowly and painfully walking up to surgeries because the elevators have long seen broken beyond repair. Or a kitchen that can no longer feed the patients or a little boy… who came in with a broken leg and is now clinging to life because an infection set in to his femur and doctors, unable to treat it because they did not have what they needed, instead removed that femur bone… and that little guy just lay there in a ward where most beds don’t have mattresses anymore because there isn’t the capacity to properly clean or sterilize them,” she said.

There have been wonderful instances, too – the times that remind her why she does what she does. She recalled a moment in Liberia as one of these moments. It was during the Ebola crisis. A woman was just cleared of the disease, and a nurse put her hand on her.

“It was the first time she’d been touched in possibly months and it was so emotional… I thought ‘I can’t believe I just witnessed this, this is why I’m here.’”

In a question and answer session moderated by Kristy Kirkup, national affairs reporter for the Globe and Mail, Arsenault said that the things she’s seen will never be forgotten.

“I always think about what happens to people,” she said. “I have a relationship with my stories. They follow me for some time when I come home. It’s almost like having shadows behind you on the street. I let them follow me and tap me on the shoulder here and there but there usually comes a time where I turn around and say ‘enough.’”

Despite some of the horrors Arsenault has seen, she’s said in the past that she has a “crush” on her job. She said she feels privileged to be able to do what she does, and she’s confident that there are young journalists who are fighters just like her. When asked to offer some advice for journalism students who want to follow in her footsteps, Arsenault said to put fear aside.

“Learn another language, keep good notes, and say yes to everything.” 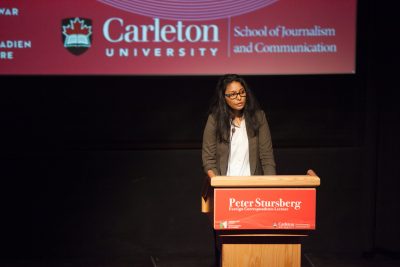 Peter Stursberg believed in the importance and impact of journalism in war zones and areas of conflict around the world. In 2016, his children, Judith Lawrie and Richard Stursberg, endowed an award in his name, which is to be granted annually to an outstanding graduate student in the Master of Journalism program. The award funds research and travel costs associated with a thesis or master’s research project relating to human conflict, the media and conflict studies, conflict resolution, reconciliation or reconstruction.

At the lecture on Nov. 30, Lawrie announced that Master of Journalism student Niranjalli Varma was the recipient of the second Peter Stursberg Award in Conflict Journalism and Media Studies for her India-based project Dealing with Stigma: How the World Changes for Relatives of ISIS Recruits.

“Almost 120 ISIS recruits have been reported from the state of Kerala. This is the highest in the country,” Varma said.

“There is a continuous battle being fought in the minds and homes of the people – a battle against extremism and radicalization. I am trying to bring to you the stories of the lives that have shattered. Mothers who have lost their children. Children who have had their childhood snatched away from them, sometimes even before they are born. The Stursberg scholarship has given me the opportunity to explore the lives of ISIS recruits, and how it has affected their families and the society at large… a very resilient society [that is] fighting to maintain its original identity.” 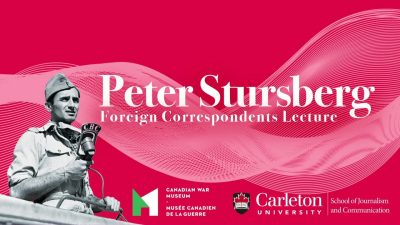 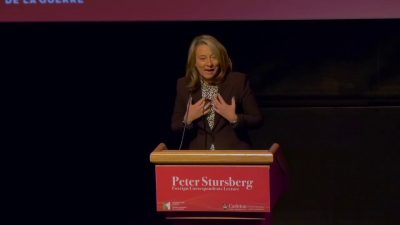 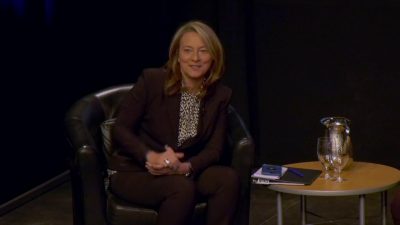 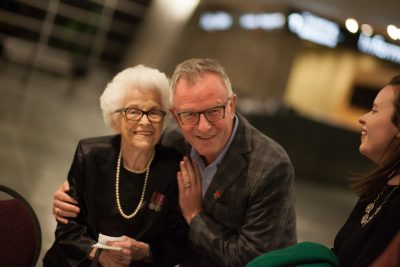 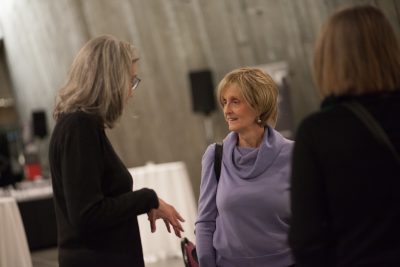 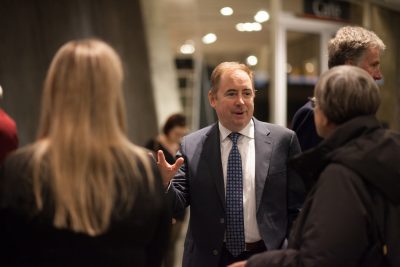 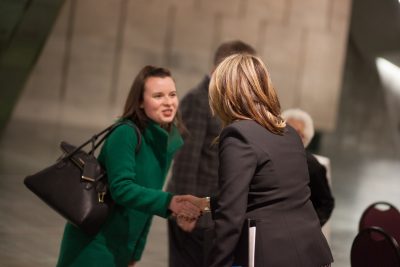 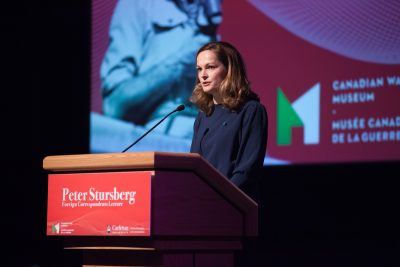 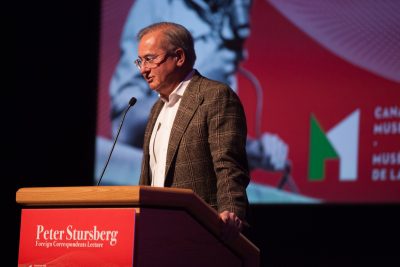 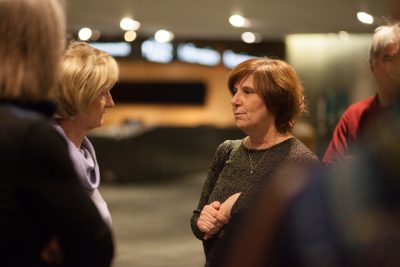 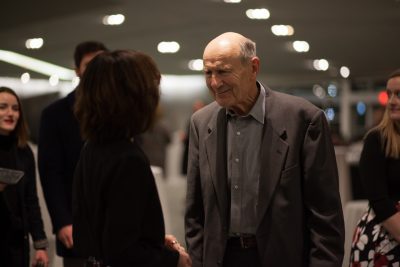 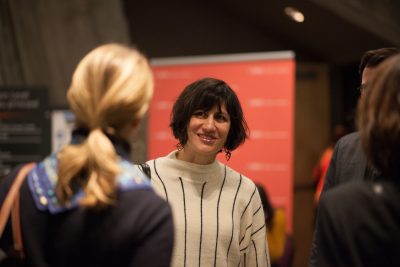 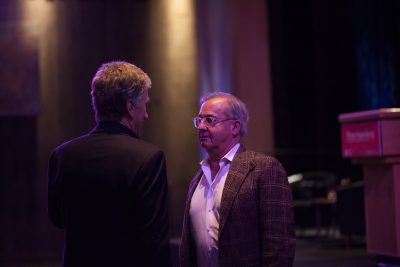 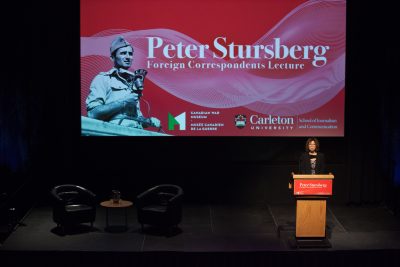 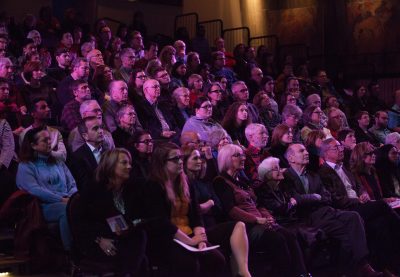 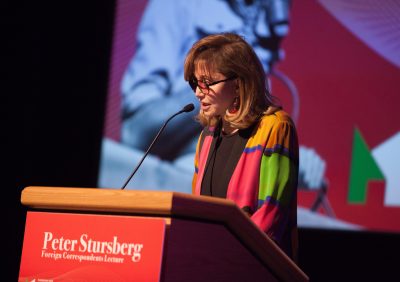 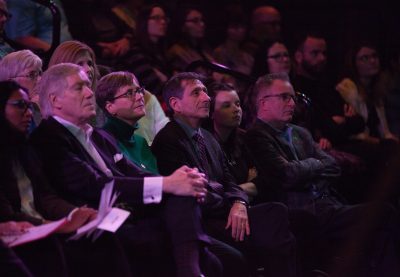 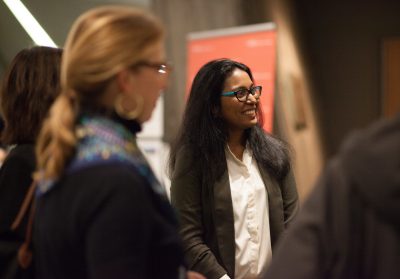