Historical biographies have always been a popular avenue into the past, but with the facts about the famous and not-so-famous available at the tap of a keyboard, today’s historians and biographers are reshaping the genre.

The conventional steady hike through the chronology of a life is giving way to group biographies, to micro-histories which turn a spotlight onto a limited period of an individual’s life, and to previously unheard voices. Writers continue to use biography as a vehicle for wider social and cultural histories, while assessing the past in ways that resonate with contemporary audiences. Increasingly, authors who want to take life-writing outside the cradle-to-grave frame are embracing the freedom offered by digital publishing.

Lecturers will speak about the subjects of their recent biographies, and also about the choices they made in how they presented their material.

All lectures start at 1:00pm followed by a reception from 2:30-3:30pm. More details to be posted as they become available.

A recording of this lecture is now available for viewing. 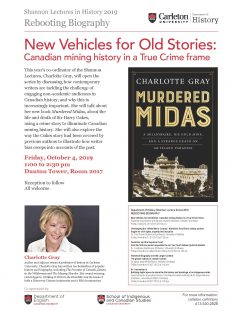 This year’s co–ordinator of the Shannon Lectures, Charlotte Gray, will open the series by discussing how contemporary writers are tackling the challenge   of engaging non-academic audiences in Canadian history.  She will talk about her new book Murdered Midas, about the life and death of Sir Harry Oakes, using a crime story to illuminate Canadian mining history.  She will also explore the way the Oakes story had been covered by previous authors to illustrate how writer bias creeps into accounts of the past.

Charlotte Gray, author and adjunct research professor of history at Carleton University, has written ten bestsellers of popular history and biography, including The Promise of Canada, Sisters in the Wilderness and The Massey Murder. Her award-winning Gold Diggers: Striking It Rich in the Klondike was the basis of both a Discovery Channel miniseries and a PBS documentary.

A recording of this lecture is now available for viewing online.

This lecture was originally scheduled for November 2019 but was postponed due to poor weather.

The experience of Black Canadians is largely absent from Canadian history books. One of the few employment options open to Black men in the last century was to work as sleeping car porters on Canada’s transcontinental railroads, often for no wages other than tips. Dr. Foster has done extensive research on the harsh lives of these men, and their determination to win respect for their labour. He will explore how their story, which was invisible for too long, forces us to re-examine many underlying assumptions about what constitutes this country’s history. He argues that Canada’s reputation for diversity rests on the shoulders of the porters’ struggles.

Cecil Foster is an acclaimed author, academic and public intellectual. Professor of Transnational Studies at the University of Buffalo, he is a leading authority on social justice and multiculturalism. His latest book is They Call Me George: the Untold Story of Black Train Porters and the Birth of Canada.

“Feminism and the Supreme Court: How the first two women appointed to our Top Court widened judicial debates.” 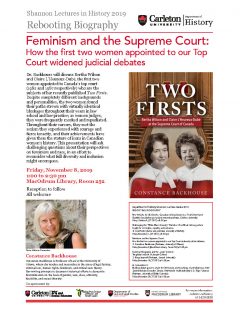 Dr. Backhouse will discuss Bertha Wilson and Claire L’Heureux-Dubé, the first two women appointed to Canada’s top court (1982 and 1987 respectively) who are the subjects of her recently-published Two Firsts.  Despite completely different backgrounds and personalities, the two women found their paths strewn with virtually identical blockages throughout their years in law school and law practice; as women judges, they were frequently mocked and repudiated.  Throughout their careers, they met the sexism they experienced with courage and fierce tenacity, and their achievements have given them the stature of “icons” in Canadian women’s history. This presentation will ask challenging questions about their perspectives on feminism and race, in an effort to reconsider what full “diversity and inclusion” might encompass.

Constance Backhouse is Professor of Law at the University of Ottawa, who teaches and researches in the areas of legal history, criminal law, human rights, feminism, and critical race theory.  Her writing attempts to document historical efforts to dismantle discrimination on the basis of gender, race, class, ethnicity, disability, and sexual identity.

“Historical Biography and the Larger Context: The global outlook of Joseph Conrad.” 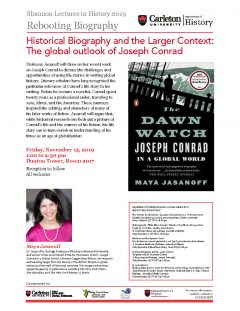 Prof. Jasanoff will draw on her recent work on Joseph Conrad to discuss the challenges and opportunities of using life stories in writing global history. Literary scholars have long recognized the particular relevance of Conrad’s life story to his writing. Before he became a novelist, Conrad spent twenty years as a professional sailor, traveling to Asia, Africa, and the Americas. These journeys inspired the settings and characters of many of his later works of fiction. Jasanoff will argue that, while historical research can flesh out a picture of Conrad’s life and the sources of his fiction, his life story can in turn enrich an understanding of his times as an age of globalization.

Dr. Jasanoff is Coolidge Professor of History at Harvard University, and winner of the 2018 Cundill Prize for The Dawn Watch: Joseph Conrad in a Global World. A former Guggenheim Fellow, her research and teaching range from the history of the British Empire to global history and the craft of historical narrative. Her essays and reviews appear frequently in publications including The New York Times, The Guardian, and The New York Review of Books.

“As I remember it: Building digital space to share the life history and teachings of an Indigenous elder.” 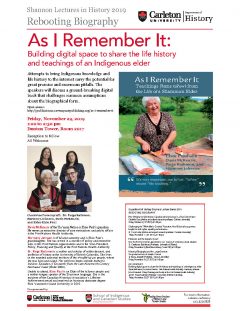 Attempts to bring Indigenous knowledge and life history to the internet carry the potential for great promise and enormous pitfalls. The speakers will discuss a ground-breaking digital book that challenges common assumptions about the biographical form. As I Remember It: Teachings (Ɂəms tɑɁɑw) from the Life of a Sliammon Elder aims to share the teachings and life history of Elsie Paul, ɬaʔamɩn (Sliammon) Elder and knowledge keeper who has dedicated her life to community service. Written with the particular needs of ɬaʔamɩn community members and students from kindergarten through university in mind, this open access book is aimed at a broad audience. The product of a deeply collaborative process, the narrative structure seeks to represent ɬaʔamɩn ways of knowing and being in the world.  The authors invite ɬaʔamɩn readers to experience this digital space an extension of their traditional territory, while they invite non-ɬaʔamɩn readers to “come ashore” as guests.

Davis McKenzie of the Tla’amin Nation is Elsie Paul’s grandson. He holds a BA in sociology/anthropology from Simon Fraser University and an MA in communication management from McMaster University. He serves as executive director of communications and public affairs at the First Nations Health Authority.

Harmony Johnson is of ɬaʔamɩn ancestry and is Elsie Paul’s granddaughter. She holds a BA from Simon Fraser University and a Master’s in Health Administration from University of British Columbia. She has served in a number of policy and executive roles in BC First Nations organizations and is the Vice-President, Policy, Planning and Quality at the First Nations Health Authority.

Paige Raibmon is a mother and scholar of settler descent, and professor of history at the University of British Columbia. She lives on the unceded ancestral territory of the xʷməθkʷəy̓əm people, where she was born and raised. Her previous books include Authentic Indians: Episodes of Encounter from the Late-Nineteenth-Century Northwest Coast (Duke 2004).

Unable to attend, Elsie Paul is an Elder of the ɬaʔamɩn people and a mother-tongue speaker of the Sliammon language. She is the recipient of the Canadian Historical Association’s Lifetime Achievement award and received an honorary doctorate degree from Vancouver Island University in 2010.