The Management of Natural Resources and the Environment in Canada: Historical and Transnational Perspectives 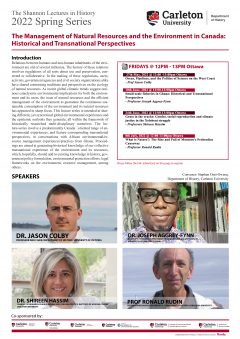 Introduction to the Series

This lecture series is intended at sharing different, yet syncretized global environmental experiences and the epistemic outlooks they generate, all within the framework of historically researched multi-disciplinary narratives. The lecture-series involve a predominantly Canada-oriented range of environmental experiences, and feature corresponding transnational perspectives, in conversations with African environmental/resource management experiences/practices from Ghana. Proceedings are aimed at generating historical knowledge of our collective transnational experience of the environment and its resources, which, hopefully, should add to existing knowledge in history, government policy formulation, environmental protection efforts, legal frameworks on the environment, resource management, among others.

Today, there is no more evocative icon of the West Coast than the orca, and there is no more prominent product of Alberta than oil. Over the last decade, these two symbols and the values they represent have clashed in heated debates over Canadian energy and environmental policy. Ranging in Canadian and US waters, critically endangered Southern Resident Killer Whales are the most studied and most culturally influential population of cetaceans in human history, and they rely predominantly on declining numbers of Chinook salmon for food, particularly from the Fraser River. In 2013, their fate intersected with Canada’s oil economy, when Houston–based Kinder Morgan proposed expanding its Trans Mountain pipeline, which transports oil from Alberta to the BC coast through the Fraser watershed.

In addition to raising questions of Indigenous sovereignty, the proposal posed new threats to orcas and the rest of the coastal ecosystem. In 2018, after years of public opposition and legal
challenges, Kinder Morgan sold the pipeline to the Canadian government, which pushed forward with the project while promising to fund research on the threats facing the Southern Resident Killer Whales. Yet the federalization of the project raised new concerns about the politicization of science, as well as the fate of the Southern Residents. This talk will explore this history of changing values and clashing icons and ponder its implications for resource management and environmental protection on the West Coast.

The fisheries in Ghana consist of marine and freshwater fisheries. The marine fishery is practice at the subsistence and commercial levels. The commercial level of fishery consists of artisanal/traditional, semi–industrial and industrial fisheries. The significant fish landings come from these three components of marine fisheries whilst the freshwater fishery contribute small amount of fish which are mainly for local consumption. The small–scale fisheries therefore are practiced both in the marine and freshwater.

The use of dug–out canoes and other traditional fishing gears in the industry dates back centuries ago. Fishing materials had been developed and improved from cotton and hemp to synthetic fibres, mechanization of canoes had improved from hand driven to gasoline even though the use of oars is still practice. However, some historical practices had been maintained such as salting, smoking, drying of fish for storage; and no fishing day and other taboos for conservation purposes.

Prof. Joseph Aggrey-Fynn is an Associate Professor of Fisheries and Aquatic Sciences in the University of Cape Coast. He has developed his career in Ghana and Germany and has experience in the research and teaching of fisheries and aquatic sciences since 2002. His research interests cover the following areas: (i) Marine microplastics in fish stomach contents, (ii) Fish stock assessment in the western Gulf of Guinea, (iii) Otolithic studies of marine fish species, (iv) Marine capture fisheries and offshore oil and gas operations, (v) Environmental monitoring in the offshore oil and gas fields in Ghana, and (vi) Occurrence of heavy metals in fish visceral organs in small-scale mining areas. Prof. Aggrey-Fynn had participated in a number of multi-national offshore cruises for oceanographic and fisheries data collection and research in the western Gulf of Guinea as a scientist in 2005, 2009, 2010 and 2012. He was the Founding Director of the Institute for Oil and Gas Studies in the University of Cape Coast from 2013-2018 and had served as a member on the National Steering/Implementation Committees on National Fisheries College (2011-2019); and West Africa Regional Fisheries Program (WARFP) (2012-2016).

This chapter examines the opposition by members of the Xolobeni community to proposed mining on their communally–occupied land, including through litigation. While only one strategy amongst many, the use of law is notable and has thus far been effective in challenging the mining company and the government. The Xolobeni struggle points to important links between efforts to overcome gendered structures of production and reproduction and environmental destruction that offers insights for feminist struggles for climate justice. We draw on Silvia Federici’s gendered framing of the commons to tease out the key tensions in the long–drawn–out opposition to mining in Xolobeni: the involvement of women as the main producers of food and custodians of the land, their movement to the centre of the struggle in the context of violence against activists, and their assertion of new forms of temporality that engage the responsibilities of the present generation to the future.

In 1968, a causeway was constructed across the Petitcodiac River, splitting in two the river that runs through Moncton on its way to the Bay of Fundy. The project was carried out by the Maritime Marshland Rehabilitation Administration (MMRA), a federal agency tasked twenty years earlier with protecting land that would have otherwise been flooded by the tides of the Bay of Fundy, the largest in the world, in the process creating marshland. With the arrival of settlers in the seventeenth century, protective structures were constructed to drain the marshland so
it might be farmed.

By the 1940s those structures had badly deteriorated, leading Ottawa to create the MMRA, but the agency went further than reconstructing existing dykes, as it also constructed dams across five major rivers, significantly altering the environment; but nowhere was this more dramatically visible than on the Petitcodiac, where the causeway provided a highway connecting Moncton with suburbs on the other side. Fish stocks were destroyed, the river downstream from the dam became narrower and shallower due to the accumulation of silt that was now deposited just below the structure, and upstream a headpond was created, where a new lakefront community was created.

In response to these environmental changes, bitter controversy ensued that lasted for over 40 years, until opening the gates in the causeway structure in 2010 and removal of much of that structure altogether in 2021. This presentation will focus on that debate and how it highlighted different conceptions of what constituted “nature.”

Ronald Rudin, Distinguished Professor Emeritus of History at Concordia University, carries out research that focuses on the environmental and cultural history of Atlantic Canada. Most recently, he is the author of Against the Tides: Reshaping Landscape and Community in Canada’s Maritime Marshlands, as well as producer of the accompanying film Unnatural Landscapes.