Have you seen this image? 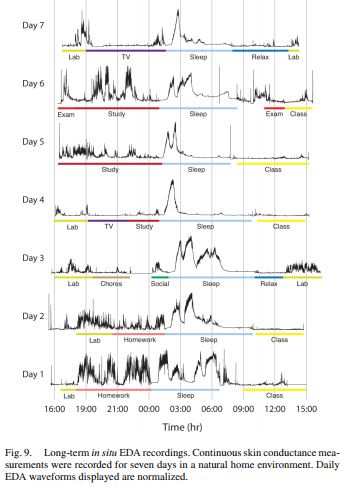 If you are in the field of education and have been attending presentations and conferences in the past three years, you probably have. The presenters often use it to make a point about ineffectiveness of lectures. I decided to search for a source of this image and found that it was published in 2010 IEEE journal article A Wearable Sensor for Unobtrusive, Long-Term Assessment of Electrodermal Activity. The article examines the results of using a wearable electrodermal activity (EDA) sensor the authors have developed. The image in question is Figure 9 and it represents a week of EDA recordings of a “healthy volunteer (19-year-old male),” who was instructed to wear a sensor 24/7 to measure long-term EDA during his daily activities.

We don’t know anything about this student or about the classes he attended. Were they lectures at all? How big was the class size? What did this student do during class? Did he eat a lot of carbs before the class? The article doesn’t mention these details because they are irrelevant for research results (which don’t have anything to do with teaching strategies and lecturing). Even if we knew all of the details about the student and about what actually happened in class, how could we make any conclusions about what happens during the majority of lectures in brains of the majority of students? How did it happen that the image started being used as a “scientific proof” that lecturing, as a teaching style, is completely ineffective?

It happens when the information seen in presentations is replicated without much attention to the context and presenter’s original message. Or when information is, in Mark Twain’s words (as stated in Kirschner & van Merrienboer’s excellent article Do Learners Really Know Best? Urban Legends in Education), “taken without examination from others who have not themselves examined the questions at issue but have taken them second-hand from other nonexaminers.”

Dr. Eric Mazur, the Balkanski Professor of Physics and Applied Physics at Harvard University and also an educational innovator, is certainly one of the most prominent supporters of peer instruction and interactive teaching and I had a pleasure of attending his live presentation on this topic. He used this image in his presentation Scientific teaching – Using classroom data to improve learning and teaching when he wanted to make a point and make people laugh, but he was very explicit about the source of the image and the case that it represented the EDA recordings of only one student. Maybe that is how it became very popular and consequently got a life on its own, while original information surrounding it got lost and new interpretations evolved. Just the other day, I attended a conference keynote presentation where presenter showed this same image with an explanation that it is the result of Eric Mazur’s research performed on 70 of his students, while someone immediately posted a conference tweet: “Eric Mazur’s machine checks brain activity!”

There is a plenty of research about the positive impact of student engagement on learning and the inefficiency of lecturing style of teaching. There is scientific “hard” data on this topic and Dr. Eric Mazur regularly presents it in his talks and publications. The case that people sometimes misunderstand and misinterpret information they hear even during very motivational and engaging live presentations, I am afraid, only proves his point.

This blog post was originally posted on LinkedIn Pulse in June 2015.