Home / News / Chalkboard teaching in the age of technology

Chalkboard teaching in the age of technology 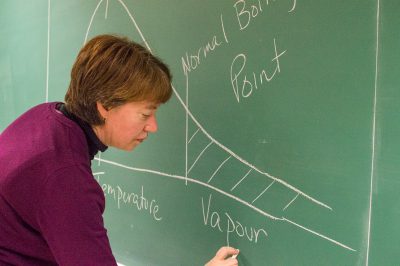 In education and beyond, technology is always adapting and progressing. Students are often seen toting laptops to class to take notes, or pulling out their smartphones to take a picture of a friend’s handwritten notes for later perusal. PowerPoint has made its way into almost every classroom, and some classes even exist without walls in an online format.

To be a proponent of teaching with simple chalk and blackboard may seem old-fashioned to some, but to others, it’s what’s saving education. A small but growing number of professors are speaking out about the benefits that chalkboard teaching—and its slightly more advanced technological equivalent—has, not only for their teaching, but also for their students’ learning.

Simon Power, a professor of economics at Carleton, is a staunch supporter of what he calls ‘chalk and talk.’

“In the past 40 or 50 years, a number of people in education have argued against the use of chalk and talk, urging other methods of instruction, perhaps more informal methods,” Power says. “I’m arguing in favour of the traditional old-fashioned approach. In some ways I think it’s more effective.”

As a professor who teaches a subject involving numbers and logic, he says chalkboard teaching meshes well due to the subject matter’s organized and analytical approach. Power finds it’s easier to organize his thoughts and he’s able to stray from prepared lessons to further explain a concept if he’s using a piece of chalk.

“There’s a huge advantage of chalk and talk if you’re teaching math or economics. You can look around the class and if you see confusion or people not being happy, it’s easy if you have a blackboard to explain a rule of calculus,” he says.

“If you’re using a PowerPoint slide, it’s not easy to go sideways. That’s why I always ask to have three blackboards in the classrooms in which I teach.”

For chemistry and environmental studies professor Pam Wolff, she felt the same way—at least until two years ago, when she had to teach in rooms that did not have chalkboards or ones that were too small. 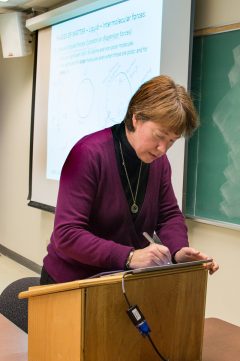 Instead of abandoning chalkboard teaching altogether, she turned to a technological upgrade that allowed her to continue her method, but with a slight twist.

Wolff uses a tablet and pen-like stylus connected to a large screen at the front of her classroom. Before class, she prepares roughed-out slides with minimal words—an equation or fact here and there—and writes directly on the slides in class to work out problems or explain further. To her, transitioning to full PowerPoint lectures just wouldn’t work for her teaching style.

“If I’m showing my students information that has been pre-printed on a slide, it’s like I’m handing them information down from on high. If I’m writing and talking and inviting them to talk about it, then it’s something we developed together,” Wolff says.

Unlike a traditional chalkboard, Wolff’s tablet has some advantages, such as being able to use colours, pre-write equations or facts, or include the answer to a problem they’re working on on the slide itself, hidden from view in a light colour.

But while Wolff appreciates the convenience that the tablet has brought, she says sometimes she feels disconnected from her students without a real chalkboard.

“I make eye contact with my class far more with a chalkboard. When I’m using my tablet, I find I’m focused on it for the whole class and after class I find I don’t really know who was there. Unlike with the board, I spend 90 per cent of my time with a desk between me and my students,” Wolff says.

Power agrees that technology can sometimes have a distancing effect on teaching.

“Students as humans are social animals. If you try to take education out of context it begins to become alienating,” he says.

Wolff says that disconnect of relying too heavily on technology for pedagogical purposes can have a definite effect on student learning, one that she strives to avoid.

“I don’t think you overcome the psychological difference of me hitting a button and the next line appears. It just doesn’t feel as inclusive . . . You can’t trick your brain into really thinking about something if you know that at a push of a button it’s already there.”