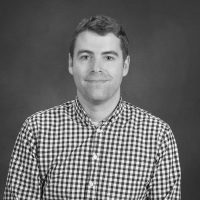 Peter Thompson is a professor within the School of Canadian Studies. Earning his PhD from Carleton University in 2009, he joined that same faculty the same year. Just a few years later, he was awarded a 2015 Provost’s Fellowship in Teaching Award for sustained excellence in teaching.

Peter brings excitement to the material for all of his classes, including those he teaches online. Though there are many challenges to teaching in the online environment, Peter sees these as opportunities and uses a variety of tools to encourage openness and engagement. Some of these tools include BigBlueButton (a web conferencing tool), along with standard chat systems and note sharing programs.

He regularly teaches all undergraduate levels and his research is divided between the emergence of regionalist movements in the Appalachia and Atlantic Canada, as well as the impact of cultures of extraction on Canadian culture.

Since joining Carleton, Peter has remained a cherished colleague and sought-after professor within the Canadian studies community.