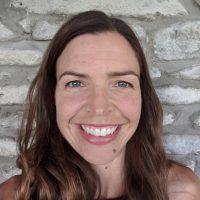 Alexa Sharp, born in Ottawa on August 30th, believed for many years that she was born on the 31st. After a childhood growing up in both Canada and Indonesia, Alexa chose to attend the University of Waterloo, where she was able to mix school and “real work” in their Co-op program. After six years she received a Bachelor of Math in Computer Science and Combinatorics and Optimization, and since the degree had so many words in it, decided to keep collecting them. Some years later she received a Ph.D. in Computer Science from Cornell University with a thesis on incremental algorithms, advised by Dexter Kozen. Keeping the academic streak alive, Alexa moved on to Oberlin College in Ohio, this time as a professor of Computer Science. There she stayed until 2017, when she unexpectedly decided to try her hand at software engineering at Google in Cambridge, Massachusetts. This fun-but-less-fun-than-teaching detour lasted 3 years and now you can find Alexa at Carleton University. Alexa estimates she has run enough miles to circle the globe around the 28th parallel, and eaten enough candy to feed, but not nourish, a small nation.