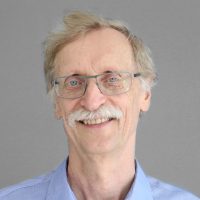 Dr. Sack’s research focuses on intelligent systems for geographic information services. He works to investigate the efficiency of such computations, build improved techniques and make use of significant relationships within the design of geometric algorithms, algorithms for computational geometry and the generation of combinatorial and geometric objects. His current research is focused on developing shortest path algorithms, which have traditionally been designed for static environments, not dynamic environments such as geographic information services. The computation of a path between two points, one that avoids obstacles but also avoids criteria such as sharp turns, is a fundamental problem for dynamic environments – environments where objects may move, disappear, appear or even change shape.  The primary goal of Dr. Sack’s current research is to develop efficient shortest path algorithms for an array of dynamic environments, analyze their performance and apply them to solving other problems such as the determination of similarity between objects.

Dr. Jörg-Rüdiger Sack received his Master of Computer Science degree from the University of Bonn, Germany and his Ph.D. from McGill University in Montreal. He is now the editor-in-chief of the journals Computational Geometry-Theory and Applications, and Journal of Spatial Information Science, as well as editor of The Journal of Visualization and Computer Animation. Dr. Sack has been the founding chair of NSERC’s national Computer Science Liaison Committee and has been instrumental in the creation of the national CS organization CS-Can. He served as Science Advisor to the German Embassy in Ottawa and until 2016, he served on the decision body for the German Excellence Initiative. He has been appointed Chair of the Scientific Advisory Board of the Zuse Institute, and is the member of the Scopus Content Selection & Advisory Board responsible for Computer Science.  He has also served as a member of the committee on G8 Research Councils Initiative on Multilateral Research Funding, the CFI Cyber-infrastructure Workshop, and the Tricouncil+ Consultation Workshop on Big Data and Digital Scholarship. Dr. Sack has been a professor with Carleton University’s School Of Computer Science since 1983.