Home / Government / Politics / Activity 3: The Institutions of the EU

Activity 3: The Institutions of the EU 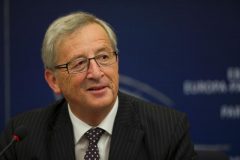 The European Union is a supranational organization that allows its members to pool their sovereignty in order to gain more global influence. Within the European Union, there are several different institutions that help the EU with its functions. What this means is that EU member states delegate some of their decision-making powers to these EU institutions, so that important decisions affecting all EU citizens can be made at the European level.

Try to determine the role of each institution and fill in the chart below:

Click on the name of the institution to find the information you need for this activity. Use the Back button on your browser if you get lost!

Still confused? Too much information? Check out the EU’s website on EU Institutions and Other Bodies | FR for a more succinct description of what these various institutions do.

While you were doing the research for this activity, you probably noticed that there are other bodies involved in the functioning of the European Union. Here is a brief description of some of the other bodies:

The European Ombudsman is the intermediary between the EU citizen and the EU authorities. His or her job is to receive and investigate complaints filed by EU citizens and residents, as well as by businesses or institutions. The Ombudsman is elected by the European Parliament for five years.

The European Central Bank (ECB) was created in 1998 to manage the new euro currency that entered circulation 1 January 2002. It is also responsible for directing the EU’s economic and monetary policy. The ECB works independently from all other institutions, and is not permitted to receive directions from any other body.

That the Structural Funds, intended to promote economic growth in less well-off regions, account for a third of the EU’s budget?

Now you can move on to activity 4.