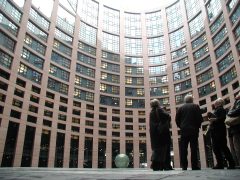 Click here to read “Troubled Waters,” a fun comic book about the European Parliament and how it makes decisions. What are the similarities?
What are the differences?
Which legislative process do you think is more efficient? Why?

Want to learn about the struggle involved in creating an EU Constitution? Check out Extension: The European Union Constitution.