Immigration and Asylum: Some Concerns for Europe 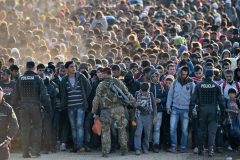 Migrants being escorted by Slovenian Police in 2016 (Source: Getty Images)

Although the European Union has a good record in human rights, there are still some areas of concern for the EU. As the EU expands, it must learn how to deal with asylum and migration. Particularly alarming to EU leaders is the rise of racism and xenophobia in relation to the increase in numbers of foreigners seeking entry to the EU. If the EU is to be a true upholder of human rights principles, it must take steps to ensure that human rights are offered to all its inhabitants, citizen or non-citizen. This involves a deep assessment of the EU’s immigration and asylum policies

Immigration is a concern for EU countries because:

In response to these concerns, the EU’s approach has been to limit the number of immigrants entering the EU. As a result, the number of asylum applications has increased because for many people in third countries, claiming asylum is becoming the only possible way to enter Europe. CLICK HERE to see statistics about asylum seekers entering the European Union.

For many EU countries, asylum is a sensitive issue because:

Overall, both immigration and asylum pose problems for EU officials because:

How should the EU deal with these issues?

“Immigration quotas will not protect our continent” from the Slovak Spectator
“Migration to Europe is slowing, but the political issue is as toxic as ever” from the New York Times
“Austria’s refugees increasingly rejected by society” from EU Business
“EU summit ‘to close the windows’ to immigrants” from EurActiv

Here’s a link back to the Human Rights main page.