The 7th annual CodeGuru Programming Competition was held on Saturday, 1st April. CodeGuru is an ACM-style competition where students solve programming problems that test their understanding of algorithms and programming techniques. This year 90% of the competition participants solved one or more problems — a new record. The two winners of the Competition — Matt Diener (senior) and Kystian Wojcicki (junior) — solved 6 of the 7 Competition problems. Matt was also CodeGuru in 2016. Congratulations to them both! 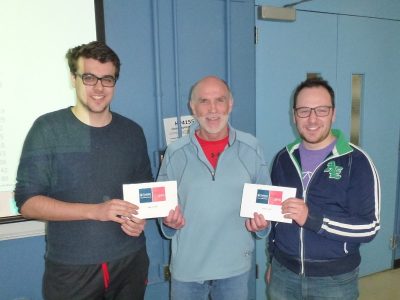 The Competition this year was more keenly contested than ever before with the lead changing hands early on but eventually saw Matt and Kystian pull ahead by the end of the second hour. The contest started quickly too, with the first problem being solved in under 10 minutes and several students solved 2 or more problems in just over half an hour. It is clear that the future for the Carleton ACM Programming team is a bright one!