The SCS server room is an air-conditioned room devoted to the continuous operation of computer servers. The servers support the operational needs of the school’s faculty, staff and students. Those operational needs are typically categorized as: departmental services, teaching and research.

The main hardware components of a server room are: 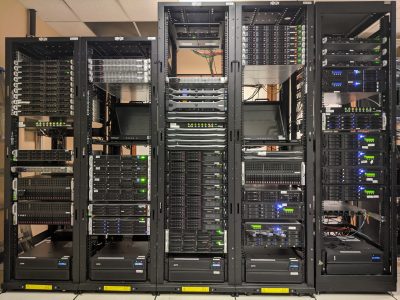 The computers have different functions that depend on the software controlling them. For example, the school has built a computing cloud to support its technical operations running on OpenStack. 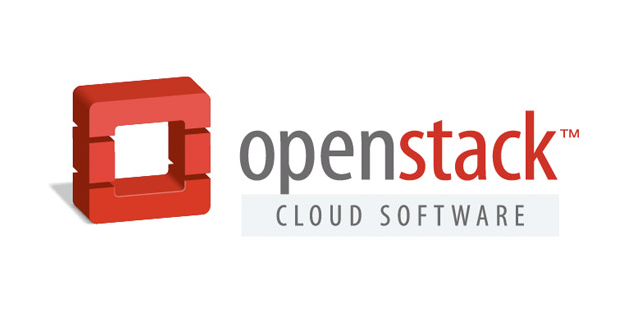 OpenStack is a free open standard cloud computing platform deployed mostly as an infrastructure-as-a-service (IaaS). To utilize the main benefit of OpenStack it requires dedicated:

OpenStack allows the management of all your computing resources and networking from the web-based console. Virtual servers (instances) can be launched on the compute servers. Networking is managed by the Virtual Networking Infrastructure (VNI) and this can also be done via the web console. Networking is managed using the Open Systems Interconnection model (OSI model) network layer approach. OpenStack conveniently manages your network infrastructure at the OSI layer 7 software level! There is no need to modify hardware or configure your switches, it is all controlled via the OpenStack web console!

OpenStack hardware has the following structure: 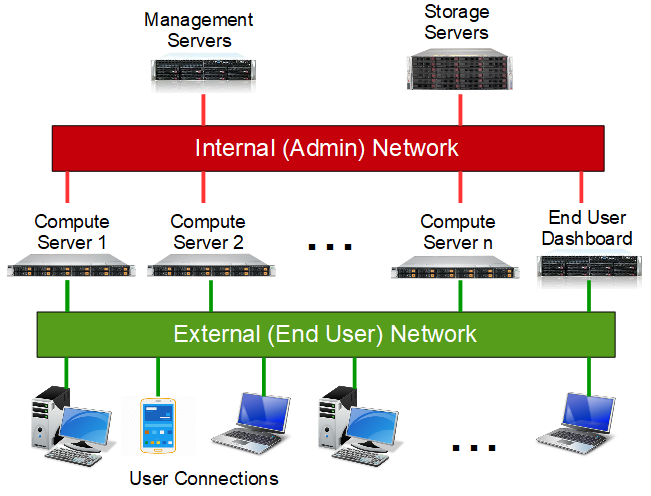 The compute servers have two network connections: one for the internal (admin) network and one for the external (end-user) network. The internal network is dedicated to the functions that OpenStack requires for its operations. The external network provides connections between the OpenStack resources and the end-user. The School of Computer Science is running a 10 Gbit network for OpenStack.

Having two separate networks on each compute server means that moving large amounts of data on one network does not impact the operation of the other network. It also increases the security of the system by ensuring external users cannot access the underlying hardware (compute servers)

Find out more about SCS OpenStack:

The server room hardware is organized on computer racks. This way the servers can be housed densely minimizing physical space. Having them close to each other simplifies connecting them. Server room servers are headless which means that you do not require a keyboard, video and mouse (KVM) for each server. The KVM connects them all to a single keyboard, monitor and mouse. 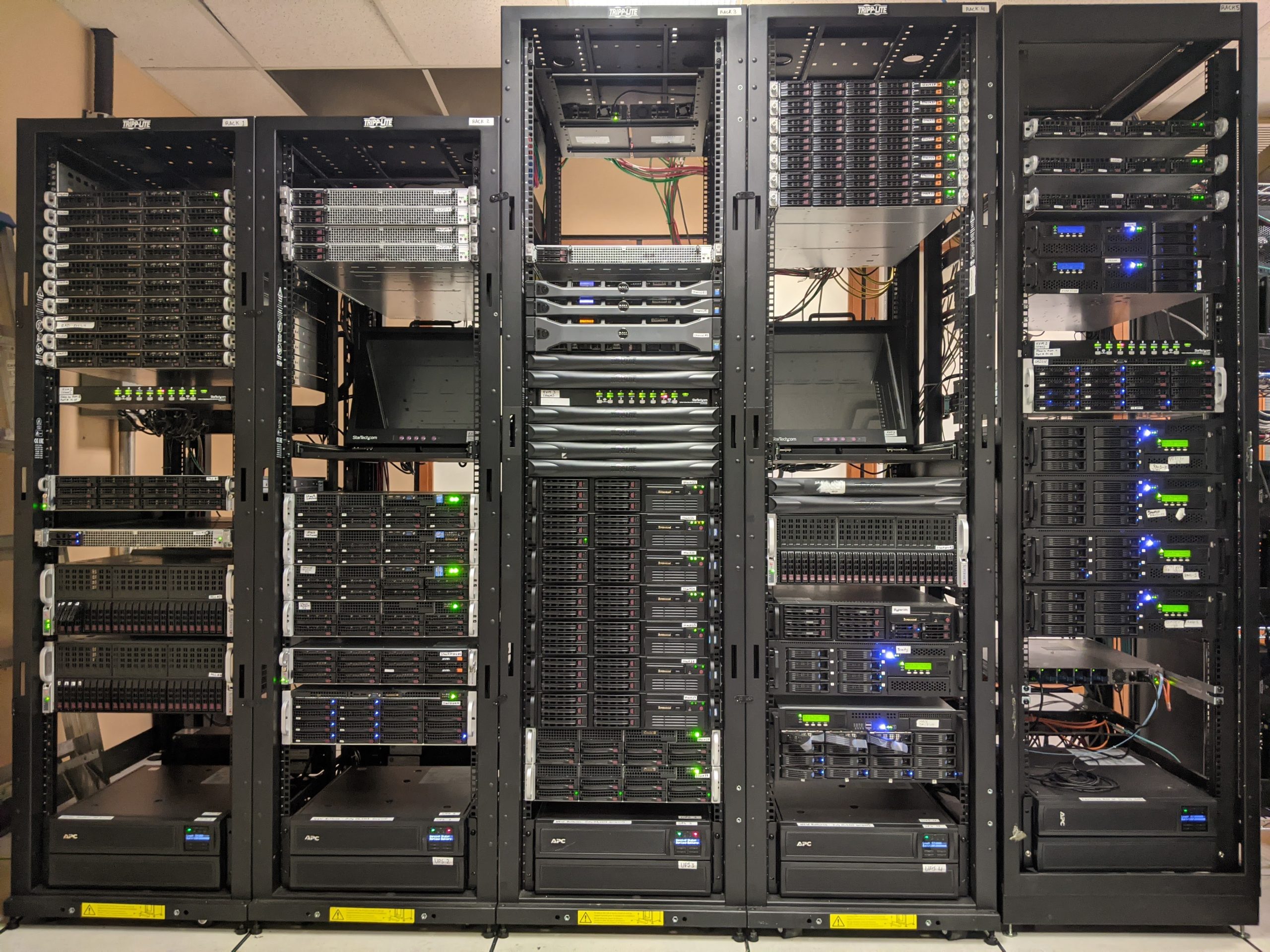 You can think of a server room server like your desktop PC, they have similar main components. The servers need to be packaged in a rackmount case so they can be densely housed on the rack. A typical OpenStack compute server has the following specs (as of Jan. 2021):

This 64 vCPU server could in theory run 64 virtual servers (instances), each having one dedicated core (with the RAM and disk space divided accordingly). However, OpenStack can over-subscribe the vCPUs, meaning you can run hundreds of virtual servers if required. RAM cannot be over-subscribed, so that is often the limiting factor. Many user applications do not saturate the CPU resources and therefore multiple users can often share CPU cores without impacting performance.

This is a major benefit of virtualization (OpenStack), it can utilize the server CPU to its full potential, something that is more difficult on a single user system. A single Openstack compute server can host more than 100 user VM’s! 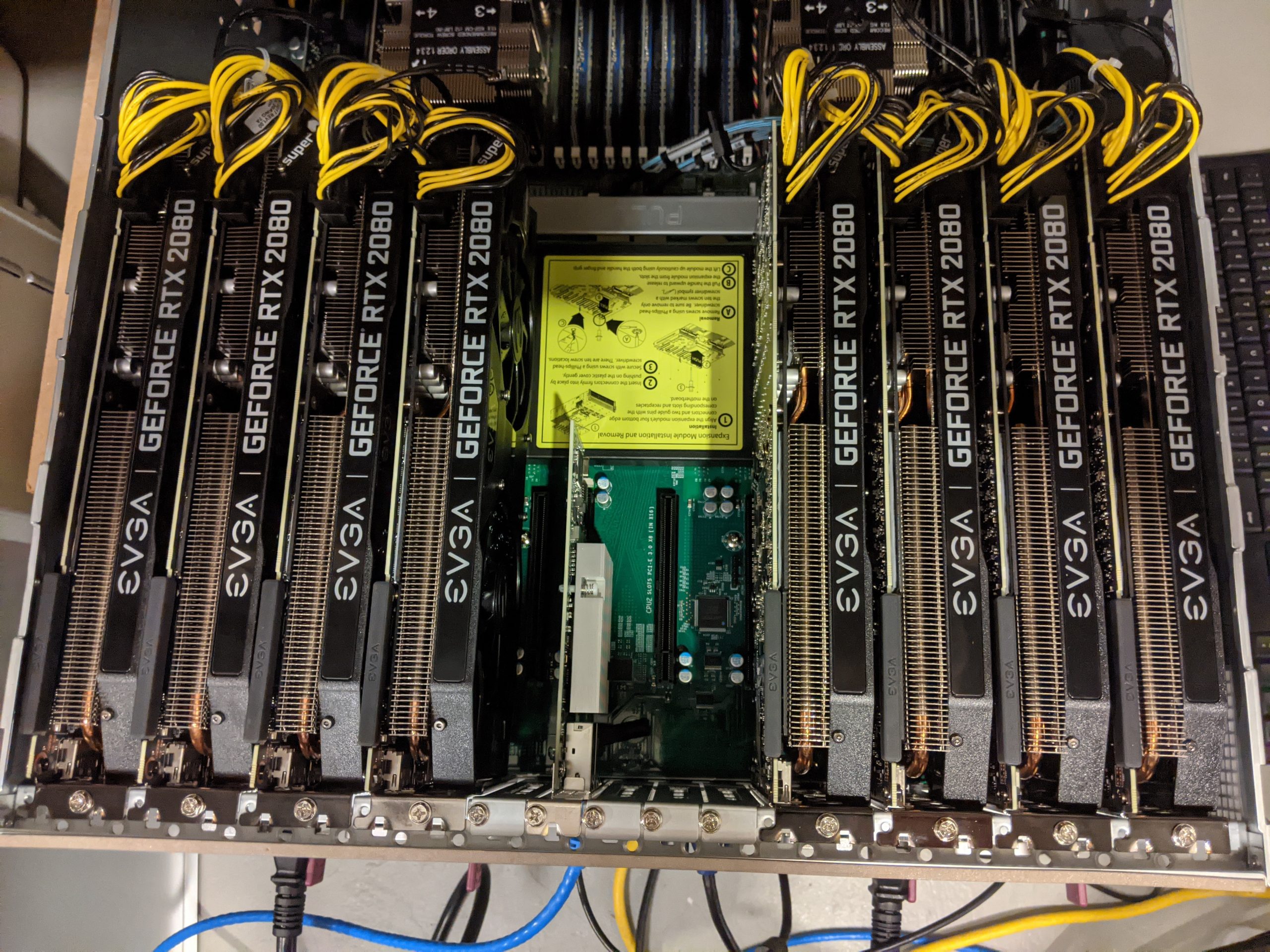 The SCS GPU compute servers are PC-based servers and can connect regular to NVIDIA gaming GPUs. Figure 4 shows a GPU server with 8 GPU cards. It is desirable to have 8 GPUs in one server because OpenStack is flexible on how to allocate those resources. Having 8 x GPUs on one hardware node gives VM options:

Find out more about GPU computing at SCS: