This guide will take you through the steps of setting up a multi-node compute environment that uses ssh keys to support scripts and computing tools that communicate and move data between the compute nodes.

For this example, we will set up the following nodes (instances) on:

Instructions for setting up nodes (instances), assigning floating IPs, and connecting to instances can be found here: OpenStack Step-by-Step Guide

In this step, you will need to edit two system files: /etc/hostname and /etc/hosts. To do so, you will need to open them with root privileges by prefixing your command with the sudo command. For example, you can use the simple nano editor to edit one of the files like so:
sudo nano /etc/hostname – sudo checks that your user is authorized to run commands as root and will prompt for your password

Step 3: Set up the SSH Keys and Environment

Setting up a passwordless ssh key environment will allow your scripts or compute tools to communicate and move data between all of your compute nodes. This tutorial will not go into all the background about ssh key pairs, but you can learn more about that in this guide: Passwordless SSH With Key Pairs.

Steps for setting up the ssh key pair environment:

SSH public and private key (key pair) and environment files are now set up
After completing the above steps, all four ~/.ssh/ files should be configured:
~/.ssh/id_rsa – private key
~/.ssh/id_rsa.pub – public key
~/.ssh/authorized_keys – includes the public key (It will be identical to the id_rsa.pub file if no other keys were set up previously)
~/.ssh/known_hosts – includes the host keys for EVERY host (master-node and node-1 -> node-n)

Copy the /etc/hosts file to each node (repeat the below steps for each of node-1 -> node-n:)

You should now be able to ssh between all of your nodes without using a password. 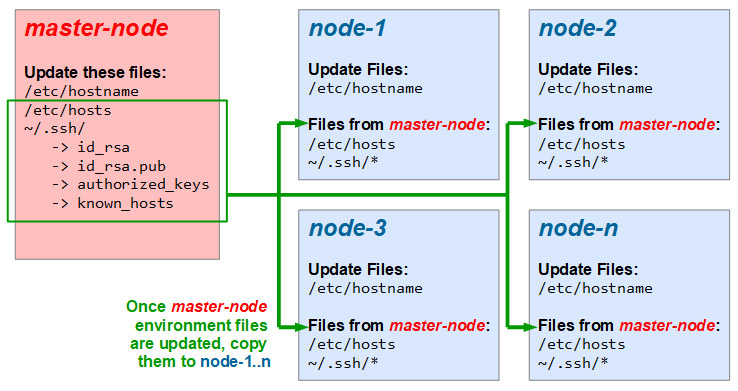 Once you have the ability to ssh between computers, either using passwords or the ssh keys as setup above, it is easy to copy files the computers. If you do have ssh keys setup allowing you to ssh with no password, then these tools will not prompt for a password. Here are a few example tools: