Being a Better 2SLGBTQ+ Ally: A Guide 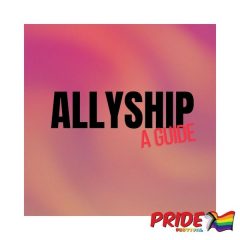 What is an ally?

Being an ally means supporting the people in the 2SLGBTQ+ community, speaking up and taking action when you witness a homophobic, biphobic or transphobic incident. Helping to make more safe spaces for 2SLGBTQ+ people and increasing awareness and acceptance on 2SLGBTQ+ issues.

Allies often act as a bridge in the conversations needed to increase awareness and acceptance on 2SLGBTQ+ issues. Allies also show the 2SLGBTQ+ community that they are not alone in the struggle for equality.

“In activist cultures, an ally is a person who belongs to a group which has particular privileges, and who works alongside people from groups that are oppressed in relation to that privilege. The hope is to create change and increase social justice in relation to this oppression” (Reynolds, 2010b: 13).

Allies are critical in helping and supporting the 2SLGBTQ+ community.

Be Open Minded, Respectful, and Supportive

Try your best to be open-minded to different ways of thinking and listen to the lived experiences of others. Believe that all people, regardless of gender identity and sexual orientation, should be treated with dignity and respect.

Take Charge of your Learning & Unlearning

Confront your own prejudices and biases, even if it is uncomfortable to do; this is the first step in seeing things from the perspective of others. Be willing to have your ideas of sexuality and gender challenged – these are social constructs and are constantly evolving. In addition, it’s important to take time to learn more about 2SLGBTQ+ issues. A lot of homophobic and transphobic ideas are based in outdated ideals.

Don’t assume that all your friends and co-workers are straight (i.e. learn about and try to avoid heteronormativity). Adopt language that is inclusive, don’t assume someone has a boyfriend/girlfriend, instead use terms like partner or significant other. Respect people’s pronouns, and politely correct others when they use incorrect terms.

Recognize That anti-2SLGBTQ+ Remarks or ‘Jokes’ are Harmful

Anti-2SLGBTQ+ comments and jokes are harmful, and they make people feel unsafe. Let your friends, family and coworkers know that you find the topic/remarks unfunny and offensive.

Respect the Confidentiality of 2SLGBTQ+ People. Do Not Out Them.

When someone has shared their sexuality or gender identity with you that does not mean it is common knowledge. Do not disclose someone’s sexuality or gender identity on their behalf. This isn’t only about respect for the person who confides in you, but about the safety of the person and the 2SLGBTQ+ community. Many 2SLGBTQ+ people are concerned for their safety, and you may be one of the few people they have told.

Acknowledge the privilege you experience based on being heterosexual and cisgender. Privilege doesn’t necessarily mean being presented with extravagant opportunities or that you have not experienced difficulties or hardships, it means not having as many barriers in life due to your sexual orientation, sex, gender identity, or gender expression. The 2SLGBTQ+ community experiences less civil rights, less safety, increased social bias, and less representation in the media and world around them due to their identity.