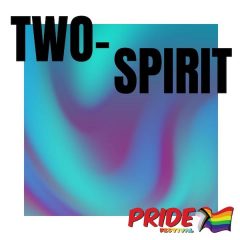 “Two-spirit” is an umbrella term that bridges Indigenous and Western understandings of gender and sexuality. It refers to a person who identifies as having both a feminine and masculine spirit. As many Indigenous nations use a variety of terms and definitions, “two-spirit” encompasses many identities and is used by some Indigenous people to describe their sexual, gender and/or spiritual identity.

Historically, two-spirit individuals have been honoured and revered, and often held important positions such as medicine people, matchmaker, warriors on the front lines of battle, and were respected as fundamental components of ancient cultures and societies. Since European colonization, however, the existence of the two-spirit community has been systematically denied, and homophobia, rigid binary gender roles, and misogyny were imposed and Indigenous people were robbed not only of their land but of their spiritual traditions and way of life regarding two-spirit people

While the concept of two-spirit is something many Indigenous people have identified with for centuries, the label came into existence in 1990, at the Third Annual Inter-tribal Native American, First Nations, Gay and Lesbian American Conference, held in Winnipeg, with the goal of self-determination across linguistic barriers and finding common ground to help educate about traditional teachings in a contemporary context. The term is a translation of the the Anishinaabemowin term niizh manidoowag.

Two-spirit is NOT  a poetic way for non-Indigenous LGBTQ+ people to identify or express themselves, rather, it is a sacred tradition among Indigenous people.

Resources to learn more about the two-spirit identity