Bachelor of Global and International Studies (BGInS) Student, Jordan Gray, made Carleton history this summer when he became the first Carleton student to present at the World Congress for Undergraduate Research. Jordan is now entering his fourth year of the Bachelor of BGInS Program with a specialization in Global and Transnational History. 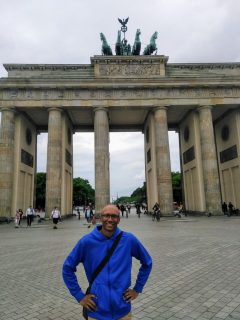 Jordan Gray at the Brandenburg Gate in Berlin

Jordan crafted a research project titled: New Champions for International Rules-Based Order? A Methodological Guide for Emerging Historians and was supervised by history professor, Dr. Dominique Marshall. Professor Marshall referred to the project as having “the potential to interest many young people to the applied aspects of our discipline.” The World Congress on Undergraduate Research, which took place from May 23-25, 2019 at the Carl Von Ossietzky University in Oldenburg, Germany, welcomed Jordan as a student presenter. The World Congress on Undergraduate Research called the work “a very timely and important topic” and “one very much needed in many places.”

In his third year, Jordan accepted an appointment to the Canadian Foreign Service. Jordan said that “in the months following my appointment theory met practice, I was able to see the great debates of liberalism and realism in addition to the theories themselves underpinning the actions of states in real time.” Jordan noticed that in Latin America and the Caribbean the challenges to world systems and what he describes as “world orders” were not as they were described to him in his classrooms or in international relations literature. Jordan noticed that something was missing and was curious as to how historians graduating today would be able to participate in what he refers to as “the new theoretical climate for IR [International Relations].” As an emerging international relations historian himself, Jordan became increasingly interested in articulating new methods for historians in the wake of global disruption. 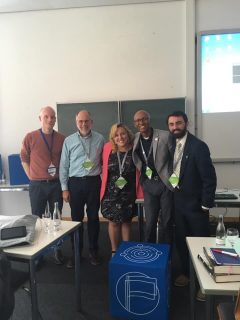 Jordan’s visit to Oldenburg, Germany marked the third time that he has represented Carleton University oversees. Jordan was able to connect with an interdisciplinary cohort of undergraduate researchers from 35 countries to discuss global issues within six interdisciplinary research themes. Following the conference in Oldenburg, Jordan travelled to the Freie Universität Berlin to strengthen existing and create new individual research partnerships. “For a historian, Berlin and indeed Germany is the place to be, and I look forward to capitalizing on the work we have done here so that future undergraduate researchers may share in this thought provoking exercise,” Jordan proclaimed while discussing the future of undergraduate research in Berlin.

“While I was the first, I am certain I will not be the last from Carleton to take undergraduate research to the world through this incredible forum.”