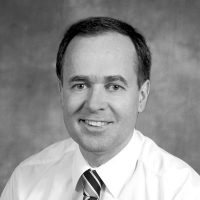 Robert Burk’s chemistry career began at Carleton University in 1990, when he received his PhD in physical chemistry. Now, not only is he an associate professor at Carleton, Robert is also the Director of the College of Natural Sciences.

The analytical chemistry of water and the physical chemistry of high pressure fluids are some of his research interests. However, Robert spends a great deal of time teaching first-year chemistry to science students and has won a number of teaching awards for it.

Robert masterfully uses technology to his advantage, using it extensively in his lectures, video streaming content to students virtually, and experimenting with the use of quick messaging systems to improve communication with his students. Apart from blending technology and student-friendly learning into his teaching, Robert effectively translates the complex world of chemistry into something educational, and even entertaining. His students interact with the material through in-class demonstrations, virtual office hours through cellphones, and the chance to sing the periodic table of elements in front of their peers.

Robert has been the recipient of numerous distinguished teaching awards during his time at Carleton, including an OCUFA award in 2004, a Capital Educators’ Award in 2005 and the prestigious 3M National Teaching Fellowship Award in 2006.