Congratulations to M.A.Sc. graduate, Scott Dutrisac, who is a recipient of a 2020 Senate Medal for Outstanding Academic Achievement. Read more about Scott’s journey as a Carleton student. 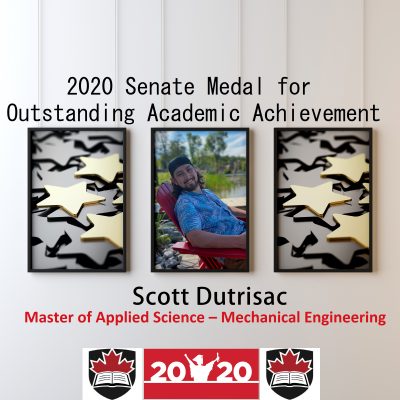 “When I came to Carleton to start my undergraduate degree in Mechanical Engineering, I didn’t really know what to expect. As a mature student, I was about 10 years older than most of the students I started with and I thought it might be strange. A few weeks before the start of the year, some upper year students, that I had been corresponding with, encouraged me to take part in the EngFrosh orientation program. At EngFrosh, I was lucky enough to meet some of the warmest, most welcoming young people I could imagine, forging strong friendships. As the department Chair told me early on, a person can learn engineering science from a textbook or the Internet, but they can’t get the experience, both socially and academically, as they can when they attend an institution. I truly believe that Carleton, complete with the C-Eng community, is a gem of a place to get that experience.

Once the workload started in first year, I realized I would need a solid study space to call my own. I found out that the Carleton Mechanical and Aerospace Society (CMAS) was recruiting First Year Representatives. It sounded like a great opportunity – a key to a study space for a couple of volunteer hours a week, along with making some announcements to classes. I got the position and started to get much more involved as I met the regulars around the CMAS office.

In my second year, I was elected as one of two CMAS Events Directors. With my counterpart, I organized trips to different engaging destinations around the city, as well as, an industry night where students had the opportunity to meet with industry professionals in a business-casual environment.

In my third and fourth years, I was elected President of CMAS, where I worked closely with the team of executives to continue bringing services and events to students, while expanding enrolment in the society.  When I wasn’t working with CMAS, I also contributed to a few other organizations – I volunteered at Leo’s Lounge, I worked with the Great Northern Concrete Toboggan Race team, and most notably, I stayed involved with EngFrosh as a facilitator and team leader.

While I had plenty of fun during my undergrad, I also did some work. My Capstone project was on the Carleton University Crash Dummy (CUCD), where I worked to develop and integrate an impact sensor into the head of the dummy. In addition, I took on the role of project coordinator, which allowed me to develop my working relationship with the professors leading the research work. Through this, I met Professors Oren Petel and Hanspeter Frei, who recruited me for the MASc program.  I thought undergrad was life-changing, but grad school is next-level.

The research work I am involved with is exciting and challenging, and I get to work with incredibly intelligent folks from all over the world. Our focus is on the response of the head and brain to impact, specifically at a range associated with mild Traumatic Brain Injury (mTBI), including concussion. We use a linear impacting system to strike specially prepared cadaver specimens, while capturing thousands of images per second using Carleton’s High-Speed X-Ray Imaging (HSXR) system. Our methods allow us to determine the way the brain moves during a hit to the head. The goal of this research is to develop a better understanding of brain trauma, using mechanical engineering and material science principles to connect the dots between impact and injury.  With this work, the understanding of injury due to head impact is sure to improve, leading to better outcomes among those affected. In addition, we can use this information to develop advanced mitigation methods and design next-generation protective equipment to aid in the prevention of these injuries.

I’m very proud of the work I have been able to accomplish at Carleton at the undergraduate and graduate levels. I believe that the research work I have been involved with is important and is likely to lead to a reduction in the risk of mTBI and the associated morbidity. Moving forward, I have decided to continue working on this exciting project at the PhD level, alongside Professor Petel. We have already done a great deal of work, but much more remains, and I’m excited for what the future holds. 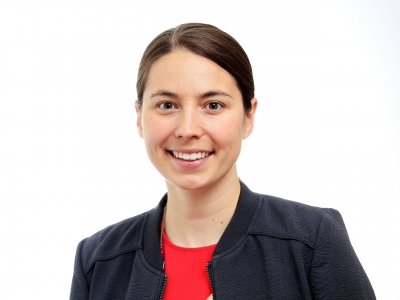 Congratulations to Professor Cynthia Cruickshank who is a recipient of a 2021 Carleton University Research Achievement Award. Click the link for more information on Prof. Cruickshank's project. 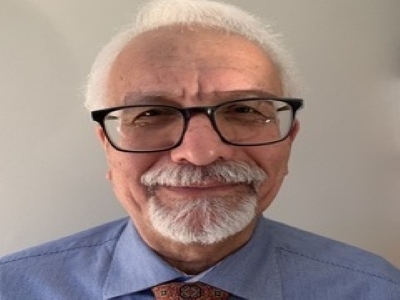 Congratulations to MAE contractor instructor, Ahmad Hemami, in being a recipient of a 2021 Contract Instructor Innovation Grant. Click to read more. 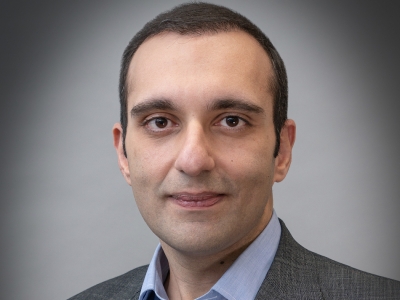 In this talk, MAE Professor Ahmed Abdulla will discuss energy system design in this radically new context, presenting results from recent research on the role of unproven technologies, like direct... More 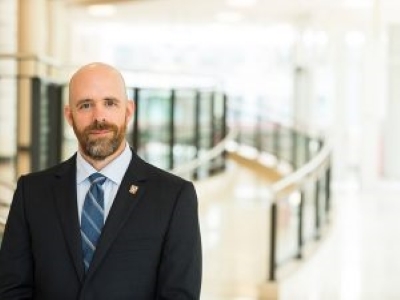 Our approach will remain flexible as the situation evolves, but here are some preliminary thoughts on what the coming year may look like. Click to read more.